How much sleep do children need?

‘How much sleep do children need?’ is one of the most common questions in parenthood, alongside ‘what age do babies sleep through the night?’ and ‘why is my baby’s poop green?’.  I’ll hold my hands up and say that I Googled these very questions just days after my daughter was born.

I naively thought there’d be a beautifully structured timetable, framed with moons and stars, that I could follow to the minute. Turns out that no such thing existed. But, it wasn’t until I became a Child Sleep Consultant that I realised why this was.

Firstly, the biggest thing to note is, the quantity of sleep that little ones need changes regularly, super helpful right? As if keeping another being alive isn’t a challenge enough for us. Sleep requirements change, from 0-3 months, 3-6 months, 6-8 months and so on, right up until 4 years old. Even a 4 year old who’s super switched-on and into everything may still need a nap if they’re suffering overtiredness. Sufficient daytime sleep is essential for healthy night time sleep. We also need to work on sufficient night sleep too, so this doesn’t have a knock-on affect the following day. For children ages 4 months – 10 years, a bedtime of lights out between 7-7:30pm is ideal. Ensuring the right quantity of sleep will be the best foundation for their physical and mental health and growth.

Secondly, quality of sleep plays a huge part in this. Your little one may tick the quantity box, but their sleep environment is equally important. If you’re always out and about, transferring them in and out of the car, in noisy environments, or even if they’re just napping on the sofa while you’re watching a film, they’re unlikely to get the quality of sleep they need in that cycle. This can result in shallow or interrupted sleep, meaning they don’t actually fall into the deep, restorative sleep we need. Lacking in quality can have the same results as lacking in quantity, which can contribute to rising levels of overtiredness.

Thirdly, the whole situation of sleep is hugely reactive. What I mean by this is, the timings of them being put down to sleep should shift depending on the quality and length of their last sleep. Each child has a wakeful window (how long they can be awake for between sleeps without entering the dangerous territory of overtiredness). This also changes regularly with a child’s age (yay for even more change for our tired minds to consider!). It’s such a balancing act, to not only get your little one the sleep they need, while also getting them down to sleep within their wakeful window, but also taking into account whether they had a broken/short sleep previously, meaning their nap/bedtime would benefit from shifting earlier, because they hadn’t fully recharged on their previous sleep. Following? Probably only just! It almost requires a mathematical mindset to calculate what they need and when. Then, just when you feel you’ve found your flow, they start to show signs of transitioning to the next stage. So, you have to reassess allllll of the above.

So, how much sleep do children need? Well, there simply can’t be a timetabled schedule, because it’s dependent on so many variables that change almost hourly.

Many parents do try to act in a responsive way, putting their child down for naps when they notice tiredness cues (yawning, eye-rubbing, irritability). The issue here can be, you may have already left it too late. Some children don’t show these signs until overtiredness has struck, especially those who go 0-100 in a matter of seconds. Being overtired has a lot to answer for. It can often lead to difficulty settling (with possible battles) or crashing out to sleep within minutes. It can result in waking after 30/45 minutes, or outright nap rejections. It’s at this point that you may think (understandably) ‘that was a short nap’ or ‘they obviously aren’t tired’, then get them up to continue their day. The problem here is, they’ve fallen short on that sleep they desperately needed. This will only fuel the overtiredness on a future sleep, and so it snowballs into the situation which may have led you here.

Some parents think that, if their child is waking up early or rejecting naps, they simply might not need as much sleep as other children. However, the stats show that only 5% of children fall outside of the ‘sleep needs’ averages. The chances are that your child does fit, but they’re having other challenges that are harming their rhythm.

As backwards as it seems, it’s probable that the overtiredness is causing those very wakeups that then results in even more overtiredness. The same goes with the night wakings and early morning risings that many parents see from overtired little ones. These very wakings themselves add up to a whole lot of overtiredness that only fuels the fire further. Counterintuitive as it seems, allowing your child more sleep can really enhance their sleep pattern, curing many sleep challenges.

Developmental milestones can be another factor in how much sleep our little one’s need. This development can upset sleep, leaving many referring to them as ‘sleep regressions’, despite the fact the child is actually PROgressing. If they’re approaching/at the ages of rolling over, crawling, walking, weaning, talking etc, and are spending their days practicing these skills (as well as rehearsing them mentally in their sleep, which is actually a thing we do!), they’re likely to need a little boost in their sleep intake until they ‘level-up’, and for a short time after too while their brain and body recover.

Teething, illness, immunisations are all things which can upset even the steadiest sleep rhythm. These examples may be other times we need to step-up our reactive parenting skills and offer earlier naps, top-up naps and/or earlier nights to our children who are exhausted by pain, irritability and change at a time they need rest, comfort and routine until they fall back into their rhythm.

I can’t recommend enough being one step ahead of your child’s sleep needs and not relying on them to tell you. They likely need you to take the lead and show them. Knowing the average amount of daytime and nighttime sleep they need, putting them down within their wakeful window (if they’re sleeping well) and being reactive with bringing their sleep time sooner if their sleep has been suffering will really benefit your little one’s sleep rhythm and be an incredible start to getting them back on-track.

Stuck in a rut with your overtired little one and want to put the issue to bed? Get in touch to see how I could help beyond this.

This website uses cookies to improve your experience while you navigate through the website. Out of these, the cookies that are categorized as necessary are stored on your browser as they are essential for the working of basic functionalities of the website. We also use third-party cookies that help us analyze and understand how you use this website. These cookies will be stored in your browser only with your consent. You also have the option to opt-out of these cookies. But opting out of some of these cookies may affect your browsing experience.
Necessary Always Enabled

Any cookies that may not be particularly necessary for the website to function and is used specifically to collect user personal data via analytics, ads, other embedded contents are termed as non-necessary cookies. It is mandatory to procure user consent prior to running these cookies on your website. 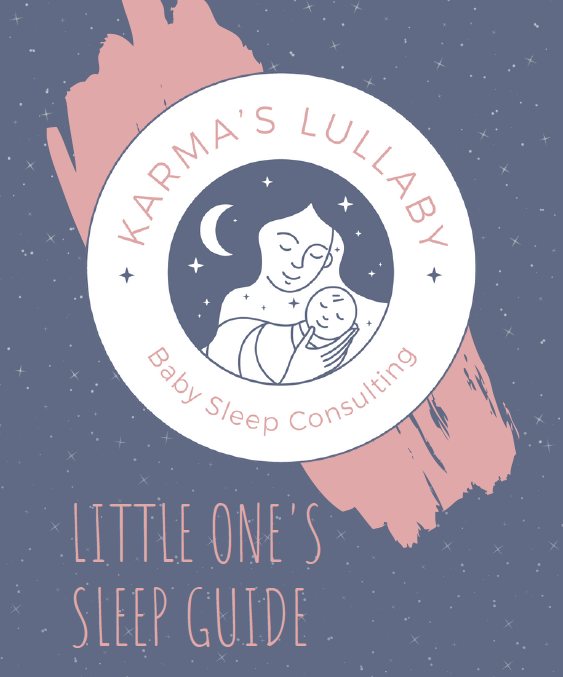 Understand how to get your child sleeping well with 5 focus steps in this helpful guide.

Check your email for your free guide, if you can't see it in a few hours, check your junk mail. Would you like to book a free 30-minute evaluation call to see if I can help some more? Visit the Get In Touch page to access this now!

By submitting your email, you agree that Karmas Lullaby may send you updates, helpful tips and newsletter goodness. If you change your mind at a later date, you can unsubscribe.